It was nice to see our Twitter analysis of the final UK election debate make it onto the BBC’s Rory Cellan-Jones blog.

RCJ’s post is an interesting one which reports several analyses from different sources, raising the question about what to publish from the Twitter feeds.

In his blog, RCJ /was surprised that we found “Nick Clegg had 37% of positive tweets, followed by Gordon Brown with 32% and David Cameron in 31%,” finishing with “My hunch is that the volume of tweets may have been higher for Gordon Brown than David Cameron – and for all those positive ones, there were actually more that were negative.”

Our issues-based analysis found nearly *4 times as many positive tweets* as negative ones.

Rory was correct that Gordon Brown had a higher volume than David Cameron overall but not on the positive vs negative scores. 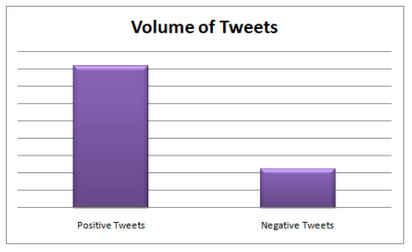 Here is a quick breakdown of what we found:

Figure 2: postive and negative tweets for each party leader