When choosing to develop an application that uses I2E, it is important to understand the capabilities of our text mining software as well details of the API itself. 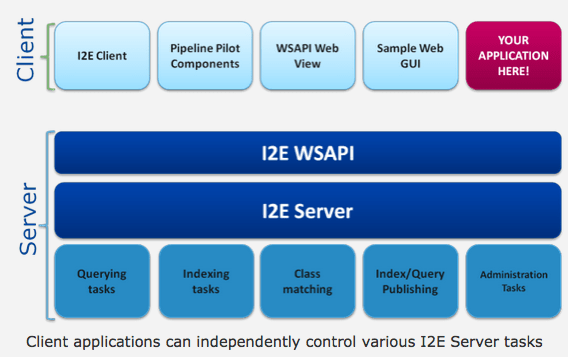 As the graphic shows, tasks that are performed on the I2E Server are independent of each other and so allow diverse applications to be created: one app to run large-scale queries and present the information in a visual form in one example; another app to process documents automatically and publish the resulting indexing to the I2E Query GUI is another.

Today’s post is more about the latter: what are the basic details of the API itself; what languages are supported and what do we provide to get you started.

The WSAPI is RESTful. It communicates over HTTP(S), which is good for a number of reasons, including the ability for users to easily browse resources on the I2E server, and because there are freely-available modules or libraries for creating clients in different languages, including JavaScript running in a web browser (or even the web browser itself).

Here is a short list of some libraries/modules that we or our customers have used in our applications to communicate with the I2E server using the WSAPI:

By the way, the “apps” in this case have ranged from “show me server information” (trivial) to “create an index-query-results workflow” (functional), i.e. not all of these libraries have been tested to the same extent.

If there are other languages and libraries that you think could be added to this list, add it in to the comments, below.